The following case is about a thirteen years old female patient who broke the incisal portion of her 1.1 tooth after an accidental trauma, occurred when she was eight.

The colleague that first took care of the young patient performed a direct cupping of the exposed pulp using biocompatible materials that induced the formation of a dentin bridge and allowed to maintain the tooth vitality. In the same appointment he also did a first filling that was replaced ten years after with a second one. This was the patient’s condition, from which I started the treatment.

The patient, who has a high smile line with a parables gum exposure, requested a treatment that could restore the balance and the mimetic situation of both the teeth and the dental gum.

The cause of the different position of both the incisal margin and the gingival parabola between 1.2 – 1.1 and 2..2 – 2.1 teeth was due to a passive extrusion that caused a slow descent of the 1.1 tooth during the twenty-two years passed since the trauma. This has reduced the difference level between the 1.1 and 2.1 incisal edges but, at the same time, it has increased the difference of the gum parabola levels of the same teeth. In fact, during this type of extrusion, the tooth lead down the vestibular cortical of the bone with him, which is the biological element that influences the marginal periodontal tissue position.

I began the treatment with a radiographic examination and a vitality test on the element 1.1, which gave a positive result.

Then I took photographs of the patient’s face, of her smile and of the details of her upper front teeth. At the same time I took an impression using an addition silicone, to obtain a model for a diagnostic wax-up simulation, which could simulate the final restoration result and guide my work during the next stages of the treatment.

The first phase of the treatment consisted in an osseous resective periodontal surgery, to realign the bone level around the tooth 1.1 with that of the tooth 2.1. The same realignment was done with the gum parables, through an incision appropriately done.

In the same appointment I carried out an upper lip frenectomy and relocated the cement-enamel junction of the tooth 1.1, making it similar in shape and height to the one of tooth 2.1. For this step I used some flowable composite, after performing the proper adhesive operations. This procedure enables a better and faster healing of the marginal periodontal tissue and allows the realignment of the gum parabolas.

I executed only a root planing on tooth 1.2, because its CEJ already had the same shape and position of the tooth 2.2.

The second phase of the treatment involved the reconstruction of the tooth 1.1 with a direct technique, so as to allow the periodontal tissues to recover after surgery and to simulate the aesthetic and functional condition I would have had at the end of the treatment.

Six months after the surgical phase, soft tissues were stable so I proceeded to prepare the vestibular and palatal faces of the tooth 1.1 using the three-quarters technique and maintaining the palatal cingulum.

In this phase I used coloured silicon indexes for the thickness control, whereas I used a transparent silicone mask to realize a provisional composite prosthesis with the identical shape of the composite direct reconstruction.

The final veneer of lithium disilicate was cemented after the perfect rubber dam isolation and following the adhesive technique through the use of high quality light-curing composite cements, specific for this kind of prosthesis.

After this preparatory phase, both the ceramic and the dental tissues were impregnated with the adhesive liquids which allowed, together with the cement, the union of the two parts. This way veneer and dental tissues become and work like a single body.

Thanks to the use of the dam, cement and adhesive were not present in the crevicular sulcus after the cementation process.

The last images show the rehabilitation aspect in a two years control. 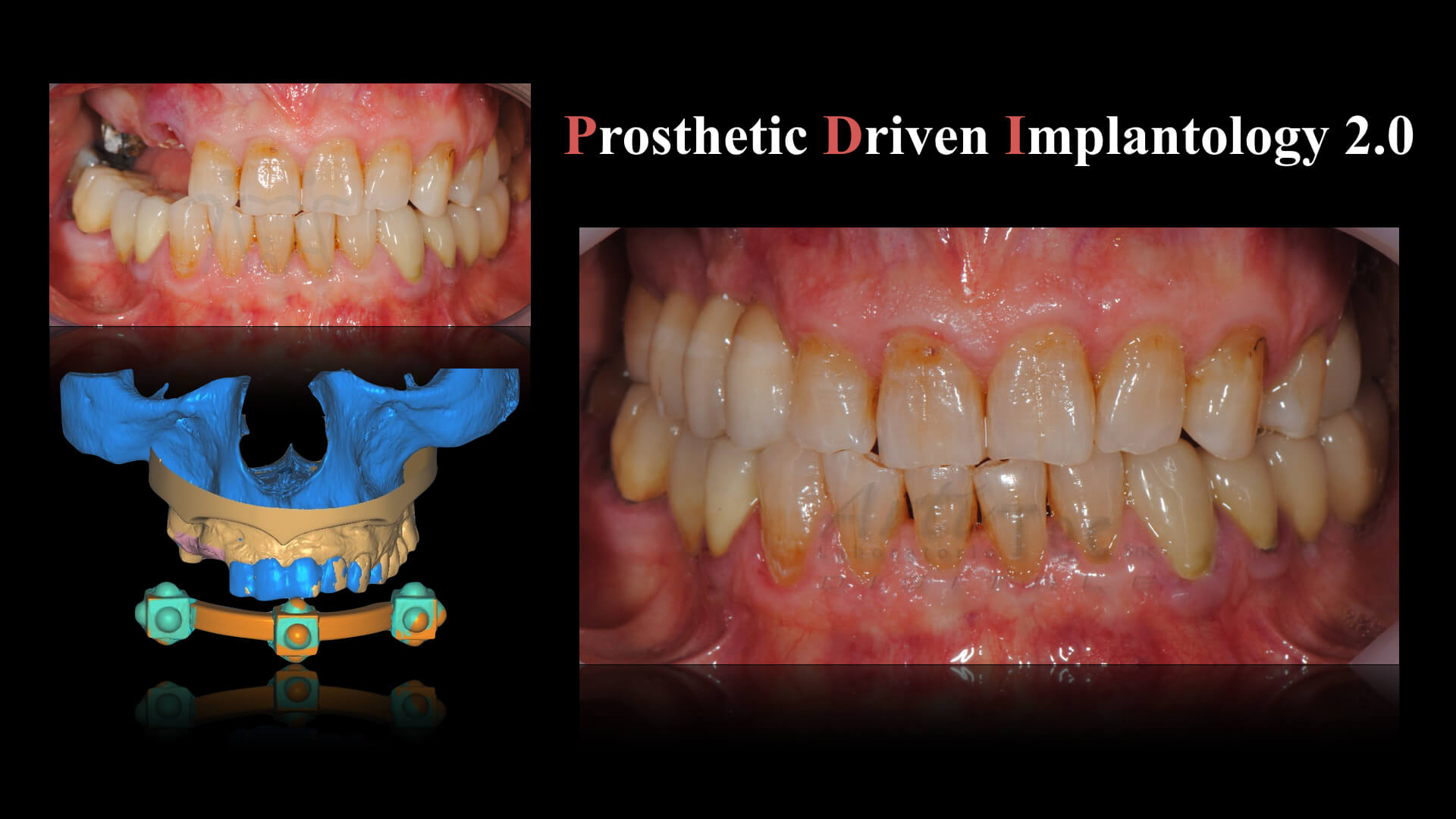