Intedisciplinary management of a full mouth rehabilitation: the smile design of the 50 plus generation

A 67-year-old man presented for the prosthodontic rehabilitation of his partially edentulous jaws. His dental history included some extractions of the hopeless teeth and their replacement with fixed teeth supported prosthesis. He expressed desire for the improvement of his chewing capacities and asked for changes in the appearance of his smile. Clinical and radiographic examination revealed a moderate to severe degree of alveolar ridge resorption, with major bone loss in the sites of tooth #33 and the right upper quadrant. Two implants were previously placed in position 43 and 33 to support a six units bridge, one of them failed.

A treatment plan was prepared after a standard protocol that took into consideration the patient’s desires, treatment alternatives, and treatment costs. The plan included the surgical implant placed of 4 implants in each jaw and fabrication of a bimaxillary implant retained removable overdentures. We decided to maintain the implant #43 as an additional one to support the final mandibular overdenture, by the use of a Locator.

The first part of the treatment planning was the control of the chronic infections and extraction of all residual hopeless teeth with socket preservation technique to maintain the ridge volume. A temporary conventional complete denture was fabricated and used by the patient during a healing period of 4 months.

Because of the adequate position of the temporary denture teeth, a decision was made to use a duplicate of the already fabricated dentures as a radiological and surgical template for the implant surgery planning and execution. The desired implant location was marked on the duplicate denture and stone cast. The duplicate denture was modified for the surgery by creating window-like openings in the areas of proposed implant sites. Vertical space analysis of the denture was performed for the selected attachment system (Locator Implants Attachment and MegRhein).

Implant surgery included placement of the implants with the help of the surgical template. Implant surgery was carried out in a 1-stage surgical protocol. The implants were placed in the canine and first molar position for antero-posterior spread considerations. After the implant site #16 presented a low height due to sinus pneumatization, a sinus lift was performed utilizing lateral window technique. After completion, the complete dentures were relined with a soft-tissue conditioning material.

No complications were encountered during the surgical phase.  Five months later and after confirmation of the osseointegration, the patient presented for the definitive prostheses fabrication .

Final Impression and Mounting to the Articulator

The maxillary and mandibular dentures were used as customized trays for final impressions. A closed tray impression technique was utilized. The Cuff height of the MegRhein abutments  were selected based on the existing soft tissue depth around the implants. One Locator Abutment was placed on implant #43. The final abutments were secured to the implants, and the impression copings were placed.

The final impression was taken using a combination of high polyether  viscosity for borders registration and low viscosity polysulfide impression material placed inside the complete denture. Care was taken to center the denture during seating, and standard border molding procedures were used. After setting, the final impression was inspected and deemed acceptable. The duplicate denture was reinserted intraorally for the dentofacial evaluation, and the ideal location of the maxillary midline and incisal-occlusal plane was recorded. Standard photographs of the patients’ smile also were taken to be used in the laboratory for the denture tooth setup.

The inter-maxillary bite registration was taken using a gothic arch tracer and the 3D position of the maxillary arch was registered using a facebow. The horizontal reference plane was the Camper Plane.

The case was returned to the laboratory where standard protocols were used for the fabrication of the master cast. In the laboratory, implant analogs were attached to the impression copings, and a master cast was poured in type IV dental stone.

The maxillary cast with the duplicate denture was positioned on the flat plane of the Kuwotech mounting plate. The occlusal registration tray was seated on the upper master cast, this one was secured to the index tray and mounted to the upper member of a semi-adjustable articulator (Op Finder, Kuwotech, Kr).

The mandibular and maxillary master casts were articulated to each other with a centric relation record using the Gothic Arch Tracer, and the mandibular cast was mounted to the lower member of the articulator.

The prostheses were processed with a heat-polymeized acrylic resin using a standard compression molding protocol. The surfaces of the dentures were finished and polished. Processing clips were replaced with the light retention clips (Yellow for MegRhein and Blue for the Locator Attachment) respectively in the  the mandibular and maxillary overdenture.

In the clinic, abutments were attached to the implants and torqued to the manufacturer’s recommended value. The metallic female housing are picked-up to the framework with an autopolymerized acrylic resin, directly in the patient’s mouth, this will allow to take into consideration the soft tissue depression during function and better force management of the occlusal forces around the implants.

The prostheses were seated, and excessive pressure areas were adjusted with the help of pressure-indicatingpaste.The desired occlusal scheme was verified and adjusted intraorally. The patient received maintenance instructions, and the recall appointments schedule was established. At the subsequent recall appointment, the patient expressed satisfaction with the treatment.

Among different treatment options, an implant-retained overdenture is a simple, cost-effective solution in the rehabilitation of the edentulous jaws. The overdenture design includes a metal-reinforcing framework and uses prefabricated stock abutments and hinge-type resilient attachments for its retention. The advantage of such type of prosthesis is unequivocal on the advantages of the implant-anchored prosthesis (eg, improved quality of life for the patient and long-term preservation of the remaining alveolar and basal bone). This prosthetic option reestablish the principle functions of the masticatory system: swallowing, incision and phonation, in additionto the esthetic and smile rehabilitation. 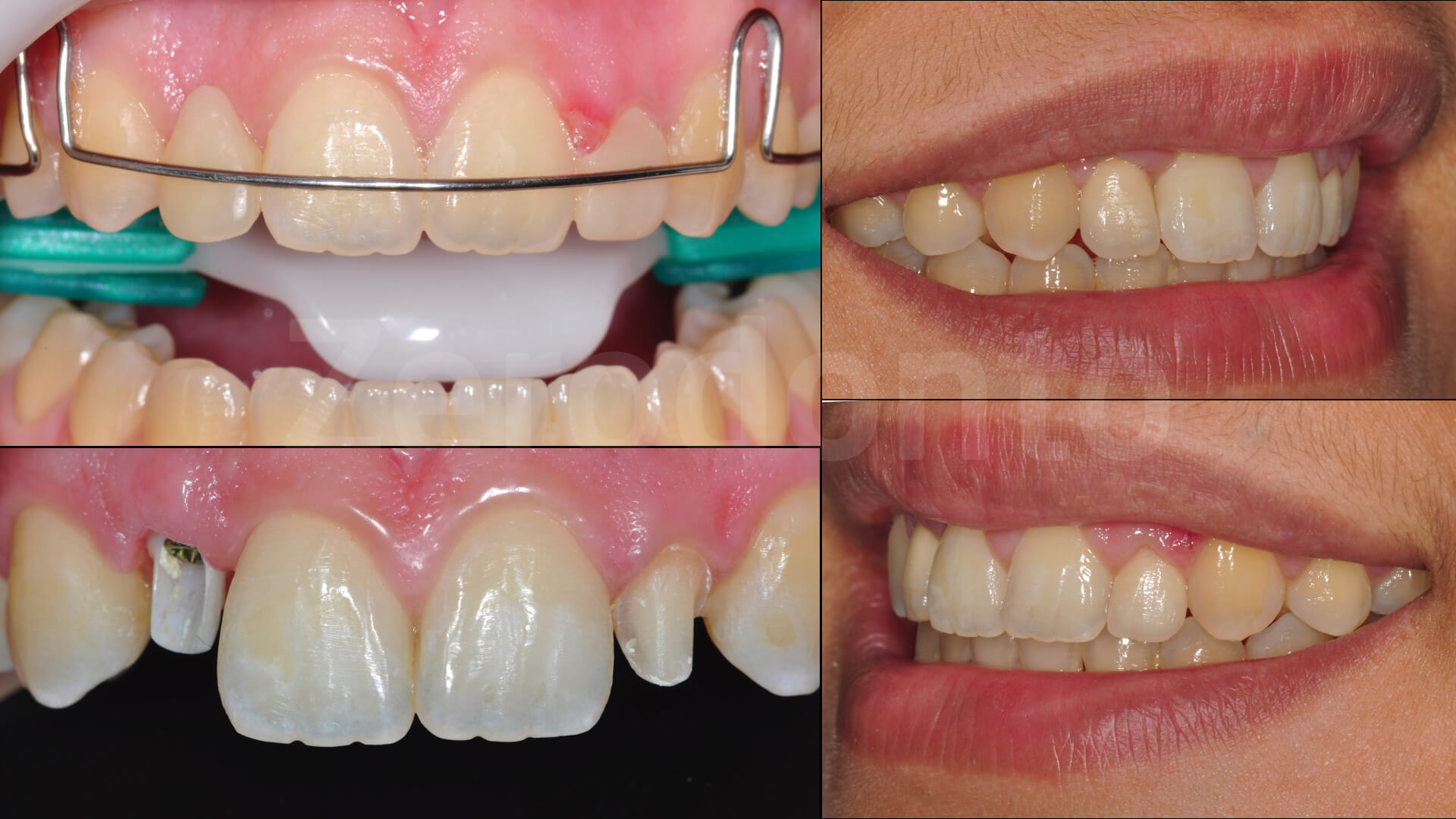