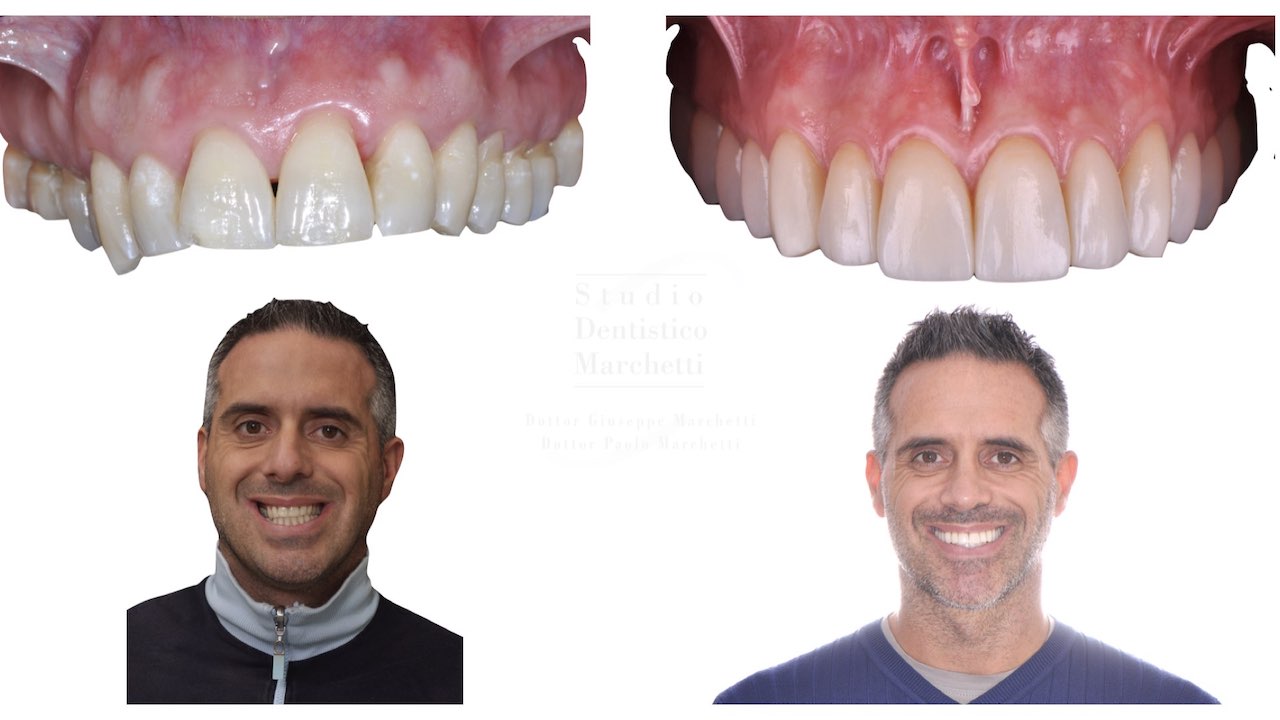 The patient, male 38 years old, came in 2012 to the attention of the orthodontist complaining about esthetic and occlusal issues and about the perception of his asymmetry. In a second time the orhodontist sent the patient to my attention for a prosthetic evaluation and to the attention of my brother for a periodontal evalution too. Then we brainstormed as a team for an interdisciplinary treatment plan to fix his problems.

Due to a condilar hyperplasia ,on the right, there was an excessive growth of the lower jaw on the right with consequent deviation of the lower jaw on the left, with a chin that was deviated on the left too. That leaded to a compensation in the growth with a consequent canting of the occlusal plane, and backing of the left canines as a consequence of the compensation of the asimmetry. There was also an antero-posterior hypoplasia of the upper jaw with a trasversal deficit. Moreover there was an asimmetry of the nose and of the nasal septum. So it was a class III asimmetric, with conditions of hyper-divergence. Both the TMJ had no symptoms, despite they seemed remodeled looking at the cone beam, and no other symptoms were told by the patient. There was also a bilateral posterior cross- bite.

patient had perio issues, and after the evaluation of the periodontist it was defined a localized periodontitis Stage II Grade A ( following the new classification of periodontal desesase ) with missing teeth 3.6 and 4.4 ( included ).

Malocclusion and wear. Lack of the anterior guidance both in protrusion due to the reduced orverbite and overjet, lack of a canine guidance in left and right laterality and presence of a group function. At the functional analysis of the plaster models there was no coincidence of maximum intecuspidation and centric relation ( centric occlusion ).

Goals of the therapy:

1)  resolution of the ortho-surgical issues

2)  resolution of the periodontal issue

3)  Surgical extraction of 4.4 impacted and ankylotic and mini-implant in 3.6 to support the orthodontics

4)  Applications of acrylic provisional crowns on the molars with orthodontic attachments inside, bonded with a composite cement

5)  Evaluation of the TMJs before the ortho procedures

7)  Maxillo surgery to fix the trasversal deficit, to get a bi-maxillary advancement and to reach a correction of the asimmetry.

9)  Removal of the previous bonded provisional crowns and adjustment of the old build up done before the ortho procedures.

10)  Preliminary impressions and face bow and taking over of the Centric Relation position with leaf gauge for the analytic wax up.

11)  Resective and regenerative perio-surgery to fix the residue pockets that last after the orthodontic therapy. Impant positioning in 3.6 and in 4.4( with GBR and connective graft in a second surgery).

12)  Application of the provisionals on implants ( screw retained ones)

13) Prosthetic rehabilitation with partial preps on the front teeth and on the premolars and crowns on the molars, to get functional results first ( recreating the anterior guidance in protrusion and laterality with disclusion in posteriors with absence of precontacts). Starting from the ortho- surgical result there was the need to open the VDO in Centric relation to increase the overjet and get a proper front guide. To counteract the negative overbite as a result of the opening of the VDO, there had been the need to increase the incisal length of the lower front teeth too ( no possibility to add on the palatal of the superiors front teeth that were only partially prepared ). The patient asked for an esthetic improvement too, so the prosthetic rehabilitation was also for esthetic reasons. All was done with pressed and painted lithium disilicate veneers, veneerlays and crowns, to copy the wax up and to reproduce the result that i got with the provisionals done directly with silicon stamps inside the mouth. All was done with a vertical cervical finishing line (except for the crowns that had a modified chamfer finishing line ), changing also the kind of partial preparations. In fact for the very first time the veneerlays have no mesial or distal boxes and are prepared almost like a feather edge crown except for the lingual-palatal surface that was not touched by the burs, to be as much conservative as possible.

15)  Follow up and perio manteinance with professional hygiene every 4 months.

This complex interdisciplinary treatment plan started in 2012 and ended 5 years later in 2017 with full satisfaction of the Team and of the patient both for the functional and esthetic outcome, all the problems were fixed, despite we could have reached probably a better amount of keratinized tissue and surgical root covering and esthetic outcome in 4.3 position ( after the graft surgery ) that probably for its vestibular position at the end of the orthodontics and for the multiple surgeries became with a longer clinical crown, but the patient refused one more surgical intervention, and we agreed to end the proshtetic case with this little compromise. 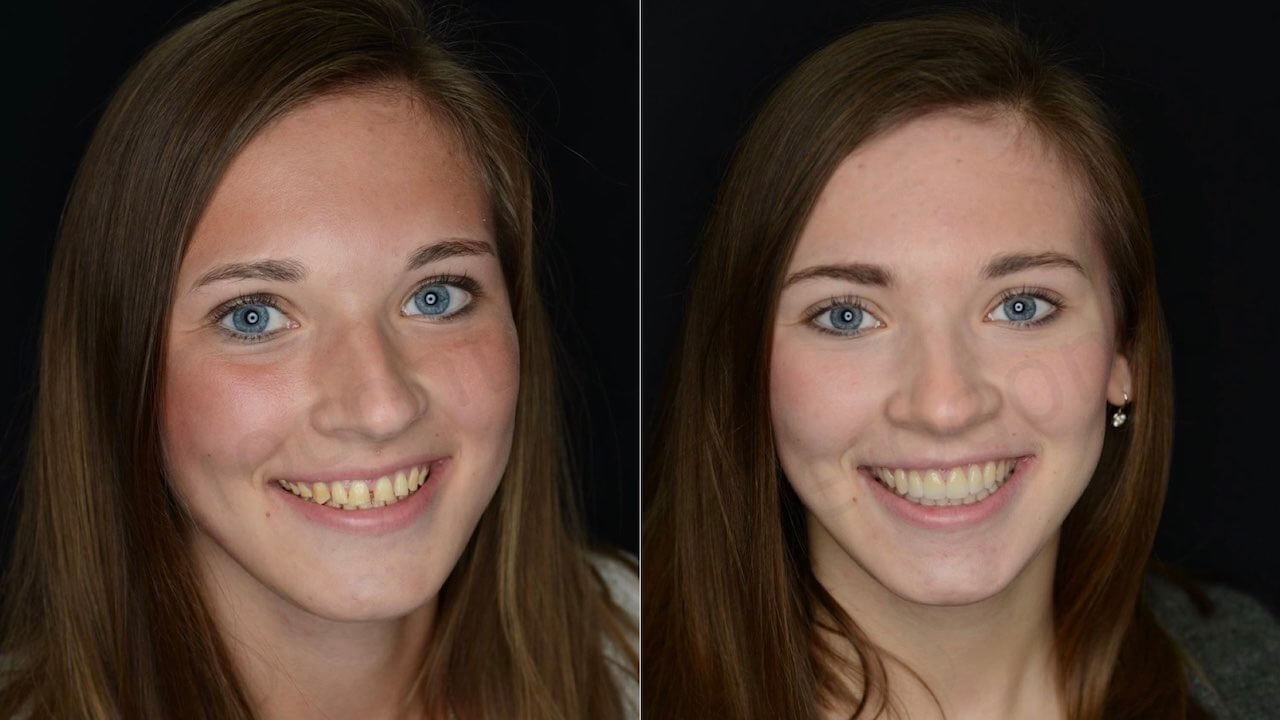 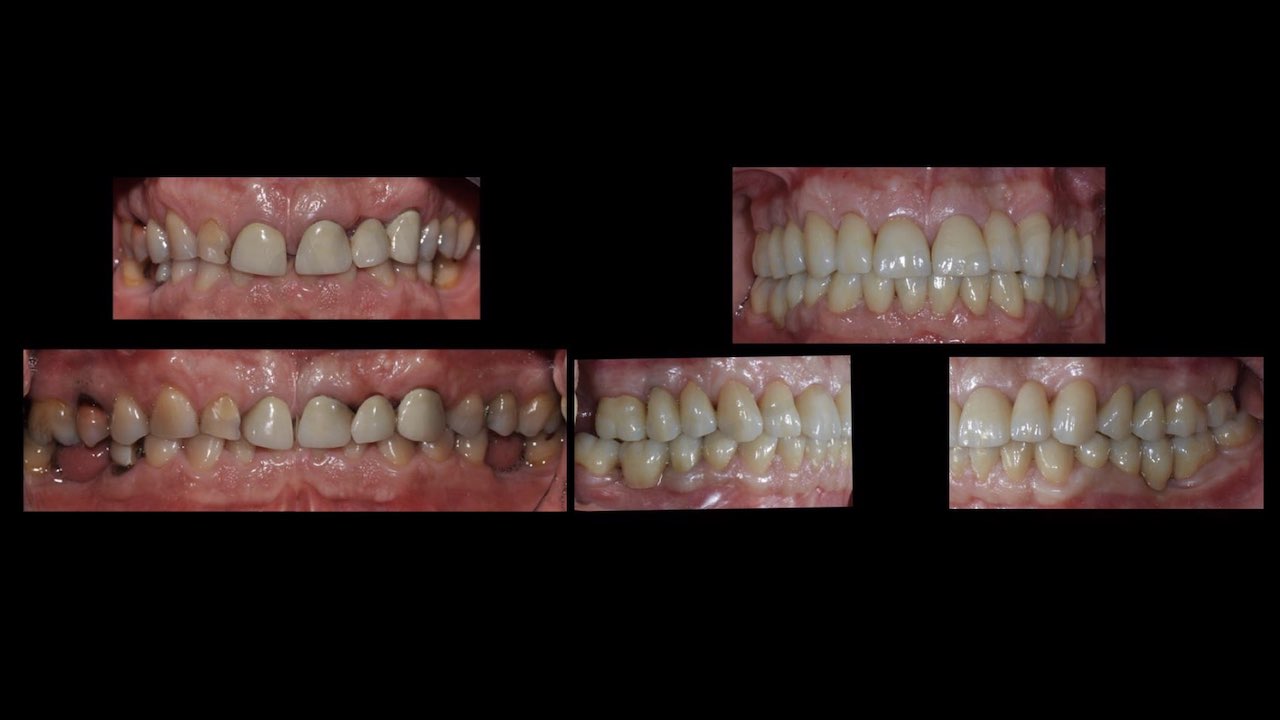